UPDATE With the release of 3.10 you can now use :: for nesting. See bottom of the post.

If you have been following Ember development, you might have noticed that starting with Ember v3.4, you have a new way to invoke components in your templates called angle bracket syntax.

In the new syntax, instead of invoking a component like so:

You can invoke it as:

The angle bracket syntax has the advantage of differentiating arguments to the component, @user, from HTML attributes. To set the class using this syntax, you would do:

This presents a problem if you have components nested inside a folder in your project, as angle bracket syntax does not support slashes (/) in the component name. Using the recently introduced let helper and the trusted component helper, however, we can do a...

The advice to avoid attrs is still relevant as of Ember 2.12, and until angle bracket components are released in Ember.

In this post I will attempt to explain why you should avoid using attrs in your Ember.js application code.

First, a bit of background on why attrs appeared. Currently we have a kind of component that is invoked with handlebars (curly braces), like this:

These have been around for a while, so for the sake of distinction we’ll call them Classic Components. Then, in the much mentioned Road to Ember 2.0 RFC and related blog post, a new kind of component was introduced that uses HTML-like invocation, like so:

Previously slated to land on the 1.x series, it has been postponed until some serious flaws are addressed...

There has been a concern circulating the Ember.js community about the removal of controllers. In this post I will attempt to demystify what is happening and what you need to do to be future-proof.

This means that when using Ember.Controller, which does not have the proxying behaviour, {{foo}} is equivalent to {{controller.foo}}. If you want the model’s foo...

As of Ember.js 1.5.0 this feature is enabled by default for release builds.

I’ve just helped push a feature to Ember.js’ master that might help you shave off a couple of lines of code. By switching on the ember-routing-inherits-parent-model feature flag your routes will inherit the model from the parent resource by default.

At the moment resources won’t inherit the model from their parents, but that might change in the future, depending on how appropriate the core team deems it.

Getting the right Ember.js

You will have to grab the build from the Canary page. You can read more about the different build channels in the Getting Started section of the guides.

First you should read through the section on the...

Laravel up and running on Cloud9 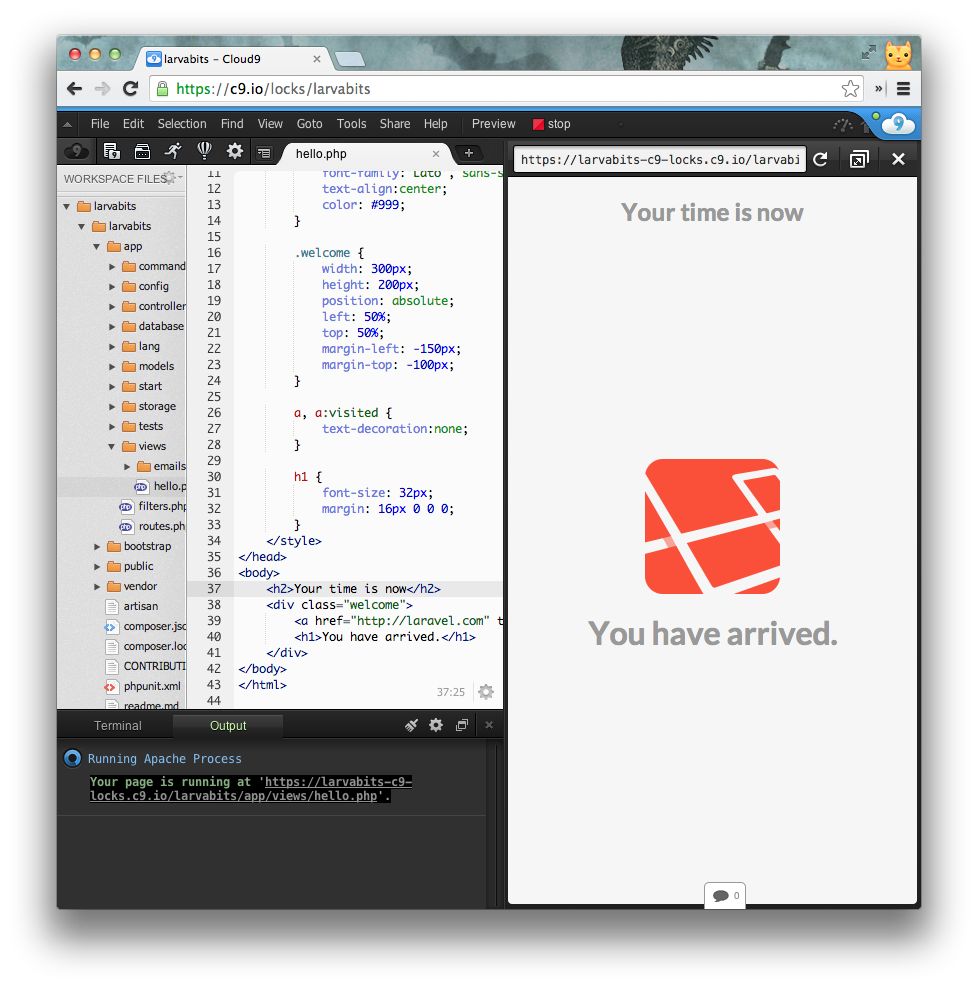 The other day I decided to try out Laravel since I kept hearing about it and maintain a PHP website myself. The weekend previous I had developed a small node.js package using nitrous.io, so I figured I’d spare my laptops from the likely scenario of poorly installed dependencies and set out to find a suitable service since nitrous.io does not support PHP.

I picked Cloud9 IDE, having used it previously, and after fumbling a bit I came upon these easy steps to have a working Laravel application:

In order, they do the following: